Sometimes we act because we feel. Other times, we act in order to feel. In this case, I belong in the latter category though I confess I have occasionally walked in the grey areas between them. There are times when certain gestures surprise us and make us feel. The trip to Iceland was one of them, and it was intended to surprise me as much as you. I honestly didn’t believe I was doing it throughout the whole process. I knew I didn’t feel enough for you to justify doing it; I also knew that you probably didn’t feel enough too. But life is a gamble and you don’t win much when you bet on what is expected to win.

I was always charmed by seemingly doomed adventures, just because they contained the foolhardy passion of innocence, and symbolized above all the love of the journey regardless of the outcome. Old enough to know better but still too young to care, I expected the feelings we would feel when we finally met properly would retroactively justify what from many angles seemed patently absurd.

I came with an emotional loan, and so far I haven’t even received enough to pay for the first installment, and bankruptcy looms ahead. I don’t mind; going bankrupt means you were once rich. What’s the point of riches if they are not spent? I am exuberant enough to lose, just because I know I will be rich again, sooner or later, and the next time I would be even richer, for the previous disaster has deepened me, and has enabled me to feel even more.

I apologize that I cannot fully complete my pledge as a gentleman (that I would just leave to watch the Northern Lights if you didn’t want to see me), but apart from the fact that you never said you didn’t want to see me (on the contrary, you said you “honestly” wanted to see me), the sun hardly ever sets in the summer in Iceland, so you can’t see the Lights when there are no nights. Fortunately, I can fulfill enough of the pledge by departing that my honor remains unblemished; I am leaving Akureyri on Monday.

I always give a woman the writings that she has inspired, at least those I deem worth being seen, since she was partly responsible for their creation. So here are some short pieces I wrote in Akureyri when I still hoped enough to write them:

“I am sure if we had met we would have gone to the same places I now visit alone. It is not difficult making my solitude pleasurable. I have got almost everything right. The street Spítalavegur; the place Café Laut – Lystigarðinum, and the little table on the corner by the window facing the garden. I can imagine each blond woman’s back to be yours; and my favorite seats have been the ones in which distance blurs enough of the face for me to imagine it is yours.”

“My first rain in Akureyri. It was bound to happen sooner or later, I just hoped it happened with you in my arms under some Icelandic duvet. I am writing only with borrowed feelings; the ones I hope I will feel on our first encounter. That is why, my dear Penelope, you should not worry that your presence will harm what you are trying to protect with your absence.”

“Life is like this sentence; you do not know where it is going to end, who’s going to read it and what will it make them feel. Do therefore give the chance to yourself and let the unpredictable elements of life add nothing you fear and perhaps, everything you hope for.”

“I am watching an aquarium across the street while it is raining. Perhaps it takes some time before God fills up the Earth into one huge aquarium. Judging by the amount of Earth covered by sea, he has not done such a bad job so far.

Perhaps we were meant to be fish and God’s slow progress allowed our species to take our peculiar path. You were meant to be that which you fear my dear Penelope, a being of the deep, with iridescent fins that holds its breath forever.”

Strolling at the grove near the University, I found the place where I would have liked to meet you. It consists of a single bench overlooking the Glerá river, behind the Kram shop if you were to head towards river. I sat there on Thursday, with my guitar as faithful company, and periodically sang “The Blower’s Daughter” by Damien Rice, believing the universe would conspire to make you pass by this point while walking back to your apartment. Orpheus almost brought Eurydice from the Underworld with his music, why shouldn’t I make you appear on this one?

I will be on the same spot tomorrow from 11 a.m. to 1 p.m.(except if it rains) and from 6 p.m. to 8 p.m. (whether it rains or not, I will sing it at least one time and leave). Perhaps you don’t want me to see you, but that shouldn’t necessarily stop you from seeing me, even though I might not notice. 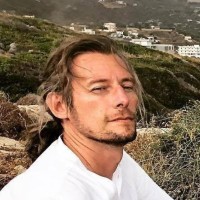